In the next post, we will continue the summary of our tracks. Where we also present the difficulties and themes of the Time Trap escape room types.
You can access the first part here: https://idocsapda.hu/az-idocsapda-szabaduloszoba-palyainak-bemutatasa-1-resz 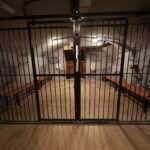 No one wants to go to prison, but great escapes from prisons have already provided the basic concept for many excellent films and TV series. You can experience this adrenaline-filled experience in a simulated environment on our Prison Trap course. On the court, the vigilant players try to take advantage of the one hour until the prison guard leaves the area and try to escape before the end of their sentence. Skill tasks dominate during the game, in order to successfully escape, the prisoners must cooperate, so the game provides a great opportunity for team-building programs. The tasks in the room will mainly use your skills, the difficulties caused by the handcuffs and bars are only aggravated by the fact that the prisoners are dependent on each other and cannot rely on anyone else. Excitement and tension increase depending on the elapsed time, thus providing a great experience for the teams who want to escape.
If you've always wanted to test your skills in such a situation, then this room is for you. The Börtöncspada is basically one of our family-friendly rooms, so in addition to groups of friends and team builders, we also highly recommend it to families if you want to try an exciting joint program in an extreme environment.

Wizarding World: Prisoner of the Wizard 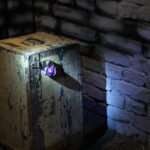 One of the special features of our Wizarding World series is the Wizard's Dungeon, which in terms of difficulty is one of our easier rooms, despite the fact that the playing time here is also 75 minutes. In the game, the sorcerer's apprentices have to go through the Room of Requirement, already known from the Harry Potter stories, to Azkaban, that is, the wizard's prison. Here, within the framework of a rescue expedition, you have to help Sirius Black, the infamous wizard, escape.
The course is completely child-friendly, although unlike our other two Magical World courses, we recommend the game here for ages 8 and up. Not because it is particularly scary, but rather because of the peculiar environment. The peculiarity of the game is that the track is not fully illuminated, and as the tasks progress, the scenery becomes brighter and brighter. However, you don't have to expect darkness at the beginning of the game either, but smaller children might get scared if they are not prepared for the special conditions.
Until the successful escape, the team that wants to "liberate" must open many cells and solve many puzzles. At the same time, it is important that they also have to be good at spells, but at the same time, the mission is not at all free of various dangers. In addition to time, participants must also be careful with the Dementors, as their attacks should not be taken lightly. In Azkaban, Dementors are the ghost-like magical creatures that guard the prisoners. It is important to know that the right spell can provide protection against Dementors, which you can also learn during the game.
We recommend this room primarily to families who want to enrich themselves with a great experience. In addition, of course, for lovers of the Wizarding World and everyone who is not afraid of a little challenge! But we are sure that the Wizarding Dungeon will provide excellent entertainment both due to the variety of tasks and the atmosphere of the track, even for those who have not been close to the wonderful world of wizards. 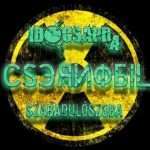 In 2019, the excellent series Chernobyl produced by HBO also won the favor of the Időcsapda team. So much so that, as a tribute to the series, we built an independent Chernobyl-themed course. The room's tasks match its theme, players must prevent a reactor accident. This, of course, for time, a maximum of 60 minutes, so that the excitement and adrenaline levels of the participants are at their maximum. In the area of ​​tasks, the technical line is more dominant, players can get to know the interesting world of relays and fuses, among other things circuit diagrams and chemistry-related tasks also add color to the course of the game. The atmosphere of the room is completely captivating, some of the furnishings and decorative elements are tools and equipment known from the civil defense, with the help of which the contestants can fly back to the socialist world of the 80s. This creates an absolutely authentic experience for those trying to get out of the room.
Our Chernobyl room rather increases the range of our more difficult courses, but solving the tasks does not require any prior training or knowledge. The track can also be absolutely enjoyable for children, so it can be a perfect choice for a great family program as well.

The trap of the Psychopath killer 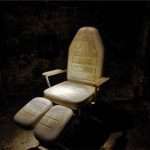 The name of our room, The trap of the Psychopath Killer, already shows that it is a more horror themed level. According to the story, it's a trap in the Murderer's houseplayers are locked in with a bomb that explodes after 60 minutes. They don't know where to look for the bomb, so the contestants have to open a series of lockers and locks. This is a classic first generation escape room with many different locks and puzzles. A great opportunity for anyone who likes intense and exciting games. Of course, we recommend it primarily to people over 14 years of age, however, you don't have to expect direct scares just because of the theme of the room. No one has to worry about getting scared while playing, since this is primarily an escape room, not a horror house, where the focus is not on the puzzles, but on the scares.